I have stumbled upon several posts and discussions on social networks, and some have contacted me about whether the eclipse is visible from Lebanon or not and about the timing.
I am writing this post to address some of your confusions. Here’s a general video from NASA’s Jet Propulsion Lab to start with:

Following is a visualization of the eclipse. The greatest eclipse (totality) occurs above the Faroe Islands, halfway between Norway and Iceland, around 1200 hours Beirut time.
In the visualization below, the strip formed by the two blue curves within which the greatest eclipse occurs is the path of totality. This is the path the shadow due to the moon blocking the Sun’s light from us follows. The further on Earth the observer is from this path the smaller the percentage of the eclipse is observed. Read on for more details.

To those who attended the event on the roof top of the Virgin megastore in Downtown Beirut back in March 2006 will remember that the eclipse was pretty impressive. The feature image at the top of this post is one I took directly using a film camera fitted with a filter. And below is another one I took through the telescope’s eyepiece. 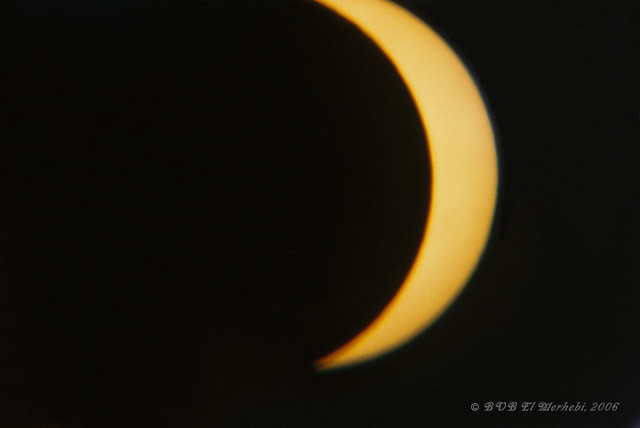 All details & times are Beirut specific.

Compare the Eclipse magnitude (Eclipse Mag.) of the eclipses of 2005, 2006, and this year. To those who remember the 2005 and 2006 eclipses, they were partial and covered around 50% and 88% of the Sun’s disk respectively. Weather-permitting*, tomorrows eclipse will also be partial and will cover 18% of the Sun as observed from Beirut and the region. From Ankara in Turkey they will observe a 40% partial eclipse.

Note here that the magnitude of an (solar or lunar) eclipse is a decimal number because it is the fraction of the Sun’s disk that is covered by the Moon from our perspective on Earth.

As for timing, the eclipse commences/starts about 1113 hours, maxes around 1200 hours and ends about 1248 hours.

WARNING: Never look at the Sun and especially during a solar eclipse without safety precautions.

To safely observe a solar eclipse I suggest two methods: eclipse glasses and pinhole method. The latter method is an interesting activity for Physics & science tutors to do with their students. Check a this post on my old website.

On a related matter, In France, like in Lebanon usually, there seems to exist a confusion (PROBLÈMES DE LUNETTES) and debate on whether students should observe the eclipse during school day or not.

Finally, here’s a link to an impressive interactive Google map generated by Xavier Jubier.
I also invite you to visit his site.

I hope I cleared any confusion or answered your questions. If you have any questions or anything you wish to share with me please leave them below in the comments or through the contact form (from the sidebar menu).

* As of writing it is totally cloudy and raining and forecasters say it will be similar tomorrow.

One thought on “Tomorrows Solar Eclipse from Beirut”