The deepest part in Earth’s oceanic crust is the Mariana Trench which is a located in the western Pacific ocean east of the Mariana islands near the Philippines and Japan. The trench is the location where two tectonic plates meet (converge), the pacific and Philippines plates. The Challenger Deep is its deepest point to which four descents have been made to. Its reaches a reaches a depth of about 11 km. 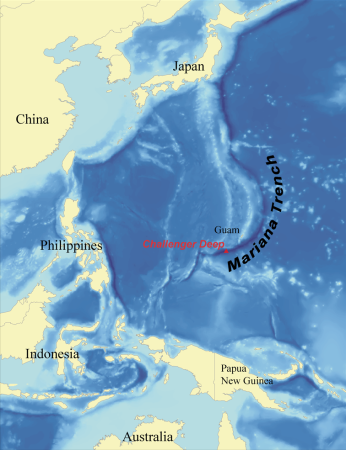 Location of Challenger Deep in the Mariana Trench in the western pacific ocean.

In 2012, 52 years after the last descent, the filmmaker James Cameron had the dream and was willing to take the risk to make a descent (video at the end) that allowed him to stay for 6 hours at the bottom. He was able to film the location in his attempt to produce two movies. 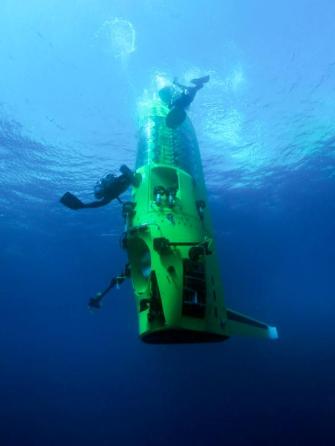 The pressure at the bottom reaches 8 tons per inch as reported by Cameron, or 1086 times the pressure you feel at the surface (i.e. 1086 bars).

Several reasons make exploring our (solid) Earth much harder than exploring Earth. One of those reasons are increase of pressure with depth, whether the depth is in water or in the solid crust. In a future post I will speak a bit about this.

Note: Being the deepest point in the Ocean’s crust does not make it the closest point to the center of the Earth since Earth’s shape is not a perfect sphere.

Below is the documentary “The Mariana Trench Mystery” from “Earth & Universe HD”.

And the following is the talk “Journey t the Deep with James Cameron” for the Nierenberg Prize 2013 through the University of California TV.

2 thoughts on “Deepest part of the Ocean”